Upon further review: Is David Gellatly really getting help?

Orders in a legal action are tricky things.  Subject to change at a moment's notice, sometimes things are not always what they appear.

A few days ago, this blog reported on certain allegations, complete with certain evidence (including his own admission) which indicated that David Gellatly, Chair of the Clark County GOP, has at least twice over the past year used cocaine and that it's likely he also used both meth and methadone during his tenure as Chairman of the Clark County Republican Party.

Earlier, the temporary order from the Court required Gellatly to be tested for drug usage.

For his part, Gellatly denies he has a drug problem.  But one might ask, who on illegal drugs in a high profile political position actually admits drug use or drug problems?

If, however, one in such a position is under such a cloud... what better way to prove that drugs are no longer a problem than by undergoing voluntary drug testing?

Yet, the formal temporary order, signed by the court commissioner, deletes this requirement... while keeping the requirement of supervised visitation. 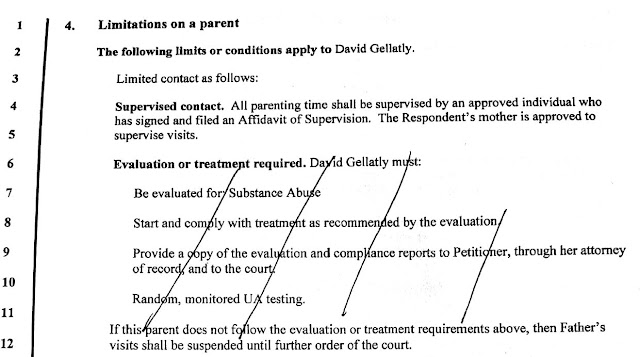 I find this odd, in the face of the finding earlier in the same order that says:

These changes were made by the court commissioner assigned to this case. Their reasons for making these decisions are mysterious based on our laymen's understanding.

But that's neither here nor there.

The question is this: is David Gellatly getting help?  Is he getting better?

If he is... then what better way to prove it than through random testing?

Under these circumstances, why would he object?

If the executive board of the local Republican Party were of a mind to, THEY could impose this testing on Gellatly as a condition of his continued occupation of the chairmanship.

Look at all of the many issues that might resolve.

I know that some of his cult of followers actually believe he's getting help for this issue, evidence to the contrary notwithstanding.

If they are relying entirely on the Court's order as the basis for that belief, then they now have to fall back to Plan B, since it would appear, for whatever the reason, that the Court is no longer requiring this testing... even though the Court acknowledges the evidence of a "problem with drugs, alcohol or other substances..."

And Plan B in this case is a requirement, placed on him by the local GOP, that he prove he is not engaging in further self-professed cocaine use or the use of any other illegal substance... say, between now and the end of the rest of his term.... weekly random testing ought to do it.

Who can argue with that?  How could anyone oppose it?

If, as Gellatly has seemingly led so many to believe, he has no substance abuse problem, this should put an end to it and be nothing but evidence both to the Court and to the local GOP that he has put all of this behind him.

If he refuses or objects... or misses even a single test... than that might send a completely different message... and both the Court and the local GOP can take the appropriate action... and at least on the local GOP's part, that would be for his immediate and voluntary resignation which, of course, should be the main part of any agreement between the Party and Gellatly.

The agreement, which should be reviewed by attorneys on both sides, would require Gellatly to undergo random testing; that he should pay for it like he's making Richard Colwell pay thousands of dollars for the legal fees he, Gellatly, is causing; and that if any test is missed or comes back positive for any illegal substance, then he is immediately terminated as Chair of the CCGOP.  Included with this agreement would be an immediate, unrevocable and undated resignation that would have the date filled in of the first missed or positive test results, which would also be reported on a weekly basis.

What say you, local GOP?  Still believe that Gellatly is getting help and staying clean?  If you do, then prove it.  If you don't... then explain again why you haven't gotten rid of this guy.