Clark County GOP Chair beset by cocaine and meth use?

A review of filings in the Gellatly divorce shows that, among other things, David Gellatly has admitted use of cocaine on at least two separate occasions during his tenure as Clark County GOP Chair, and that his estranged wife claims that he has used a wide variety of illegal drugs, including cocaine, meth and methadone that have shown up in his home drug use kit results.

Further, for now, Gellatly finds himself under court-ordered drug testing and most recently, has failed to provide agreed on samples for drug testing paid for by his wife while claiming that he doesn’t have a drug problem.

The source for this information is the Gellatly case file, which is all very much public and can be reviewed merely for the asking at the Clark County Court House.

Certainly, drug usage could explain Gellatly’s erratic behavior over the course of his tenure in this office, which has led to threats against me and my family, a law suit against a Precinct Committee Officer, a divided party organization with finances in a shambles and all of the other damages caused by his words, actions and behavior.

The records are available for review at the court house under Case number 18-3-00511-3.

Excerpts of note include: (“Mother,” in this instance, is the identification of his estranged wife)

1. Gellatly’s admission that he had used cocaine while GOP Party Chair.

2. His wife’s response to Gellatly’s assertion that he hasn’t “used any other illegal substance” for the past year, via a “cuticle test.”

3. His wife’s evidence of his drug use from home drug testing submitted as evidence exhibits.

Other pictures and tests are available in the case file

4. Episodes that included at least one time where he “overdosed.” This took place 3 days after the Kirby Wilbur visit and the vote to get rid of the executive board members who were/are opposed to Gellatly’s continued tenure as party chair. 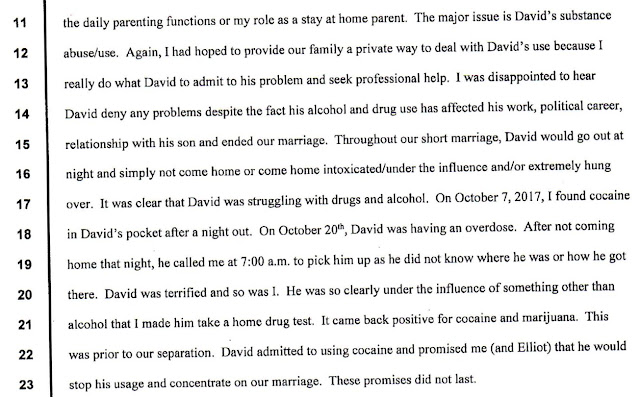 5. Response to David’s claim that he had “no criminal history.”

As regular readers know, Gellatly has been cited at least for times for Theft 3, has prior DUI’s and has had bench warrants for failure to appear and other run-ins with the law. To suggest he has “no criminal history” is to parse words like Bill Clinton declaring that “it depends on what your definition of is, is.”

6. The temporary orders limiting his access to their child except under supervised visitation

This is a sad and painful situation for all concerned. His verbiage in response to this is of the variety we’ve all seen before; he denies most everything and blames others for his situation. With a young child involved, it’s even more tragic and another example where, it would seem, hard drugs have interfered with the survival of a family unit.

I sincerely hope that David can get the help he needs. But the continuation of David’s disastrous tenure as GOP Party Chair must end. He is the public face of the GOP in Clark County. And oddly enough, I don’t believe this is the face the GOP needs.

And now the question is simple: What is the GOP here locally going to do about it?