C3G2 Hater Chuck Green's campaign event: "reengaging the voters" and signing them up for his campaign

When you're running a facebook hate group like C3G2, aka Clark County Citizens for Democrat Governance, it's easy to fool those sheep.

Which brings me to Chuckie.

Chuckie, allegedly, is doing his civic bit to organize all the leftist groups in the area for a little chat.

The ulterior motive, of course, will be to get them organized for his campaign against Olson for the District 2 council race.

But, oddly, the Chuck-Wuk wasn't talking about that when he set this garbage up: 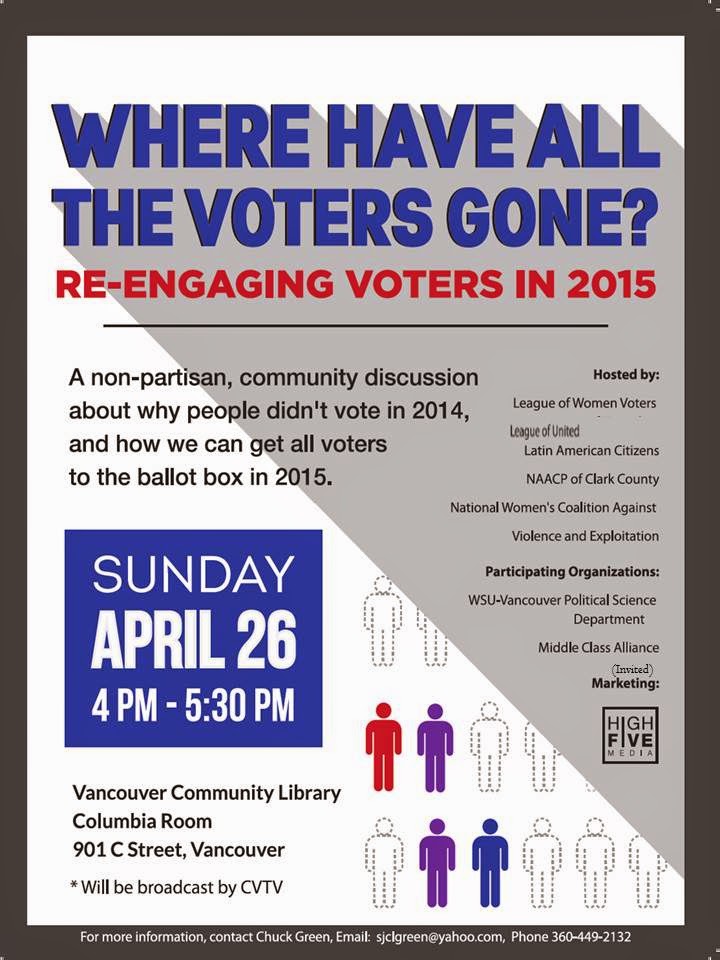 Please plan to come and participate in a community forum called "Where Have All the Voters Gone?".

This forum will be a non-partisan community dialogue on why voter turnout was the lowest in decades (50% in Clark County) and how we can not only get those voters back to the ballot box in 2015, but also bring back those who did vote in 2014.

Co-hosted by the League of Women Voters, NAACP-Clark County, League of United Latin American Citizens (LULAC), and the National Women's Coalition Against Violence and Exploitation (NWCAVE), it will include presentations from Vancouver City Councilmember Jack Burkman on some turnout data and mapping from the 2014 general election, Betty Sue Morris on what's at stake in the 2015 elections, Greg Kimsey on the Elections office observations (and hopefully part of the discussion of what the Auditor's office can do to help implement some of the voter re-engagement suggestions), and myself (Chuck Green) on the voter/non-voter survey we did last fall. A thank you to Councilmember Anne McEnerny-Ogle and LWV for help in arranging for the facilities and for CVTV.

There will be opportunities for those attending to provide questions and suggestions to those participating in this roundtable format discussion.

I have been working with Dr. Carolyn Long of WSU- Vancouver's Political Science Department to help craft an agenda and flow of this discussion, because we are time-constrained.

More about this soon. The Forum will be Sunday, April 26, 4-5:30 PM at the Vancouver Community Library's Columbia Room.

This event will also be broadcast on CVTV. The room's capacity is about 120 persons, so let's fill it.

Thanks to High Five Media for the flyer.

Of COURSE he wants to "fill it" with his fellow haters.  After all, what kind of a campaign event would this be if he couldn't fill the room?

And so who does he get to show up?  Every political figure he can who will support HIS candidacy.

I get why he hasn't said anything about running yet.  After all, when word gets out that the true motivation only has to do with increasing his fellow LEFTIST turn out, it will be just the tiniest bit awkward for people like CVTV, who really should cancel unless they're going to do the same for EVERY candidate running for office this year... and how likely is that?

This isn't even a thinly veiled campaign event.  It's the real deal... with BS Morris "talking about what's at stake in the 2015 election..." when he, right now, is the only fringe-leftist whack job running.

Wow.  This one is tough to figure out.

Chuckie would never admit any of it, of course, but you know damned well that his motivation is ONLY to increase the leftist turn out... which is the reason for his focus on race-based fringe-left groups.
at 00:00