I'm out of patience on the Herrera sympathy tour.

Nice article in the Lazy C's Herrera campaign newspaper a few days ago..  But this line got me:


It’s unlikely U.S. Rep. Jaime Herrera Beutler, R-Camas, will having any public meetings in her district between now and when Congress starts up again next month. She remains in the hospital with her infant daughter, Abigail.

But she's got time for a fund raiser or two in a few days, right? 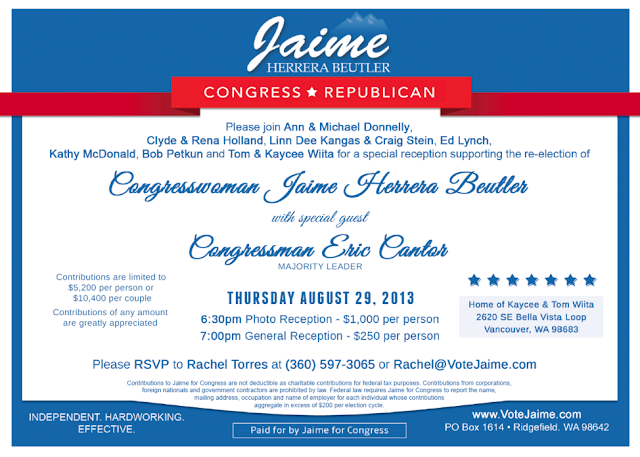 I was sickened by her efforts to use her pregnancy for political gain; after all, the empty suit has accomplished, essentially, nothing since she inherited her positions in the legislature and Congress through the efforts of Cathy McMorris Rogers, Congresswoman from the 5th District who built her out of spare parts laying around the office.

I wrote in an unpublished post: (My wife actually warned me not to publish it... and I listened to her... Now, I'd wish I'd done it)


On reading the article, though, my second thought was this: why do we have to know any of this?

What are we supposed to do?

Going back to the default mode: this is always about Jaime.

I am sorry it's turning out this way for her, if, in fact, it is.

But we didn't need to know any of this until the outcome was final, one way or the other.

Their decision to "share sad news" was an equally sad political ploy on her part.  But telling us about this?


Since announcing the sobering news on Monday, Herrera Beutler has received an outpouring of support on her official Facebook page.

As the resident cynic, and someone who has kept close track of the utter black hole of nothingness that has been Herrera's unfortunate tenure, I can only shake my head at the mindset of someone like this who would use this situation for political purposes.

And everything this woman does sure has the sheen of that.

I hope against hope that I'm wrong... dead wrong.  But what if I'm right?

Now, people will be riveted to Herrera for months as this drama plays out.... and if the baby is somehow born and lives, then wow... it's a miracle!

If it were my family, I wouldn't have said a thing until after it was over.  But like Rahm Emanuel once said, never let a serious crisis go to waste, and this, seems to be Herrera, doing that.


Well, here's the thing.  Jaime seems to me to be using this child as an accessory... sort of a set of ear-rings kind of thing; and she has been for months.

Frankly, it sickens me.  It's part of the reason I've always believed her unfit for any office... that she could use her baby in this way?

There's no excuse for this.  None.

This despicable human being can't EVER make time for her constituents, (When was the last time this coward held a town hall meeting?) and she holds her child up as a shield to avoid doing her JOB, but she's certainly got time to go out and sell a piece of herself like her office was on the street on MLK in Portland.

Bowman KNEW she was going to do this fund raiser: why didn't he mention it?

This woman is unfit for any elective office.  Always has been.

And this is another example of that.

No time for us.  Uses her own flesh and blood for political purposes... and has no trouble leaving her deathly ill child for a $250 per person fund raiser.