It seems the LDD was so abysmal that Gellatly couldn't even GIVE tickets away.

I've been contacted by folks who got late calls from the man-child running the GOP show.

The upshot is that there were so many tickets left over that Gellatly, personally, called people to GIVE away entire tables and seats... and in one instance at least, a major sponsor of GOP events that clown-boy had refused to comp, told Davey to get stuffed, as did many others.  There were, I'm given to understand, something in the area of 50 tickets that he had to eat.

Having heard this from multiple sources since the event, and having known from the get go that this idiocy was going to be a flop, when I get multiple people telling me this, it's hard to ignore.

On May 6 this year, I posted the opinion below. I had no idea that it was as close to being terrible as it actually turned out.


The "Tomi Effect."  CCGOP has to discount LDD tickets


Odd, isn't it?  The LDD is over 6 weeks away, and the local GOP has already been forced to discount their massively overpriced Lincoln Day Dinner tickets.

Can't imagine why that might be, or the reaction of those who paid the full price.  They can't be happy. 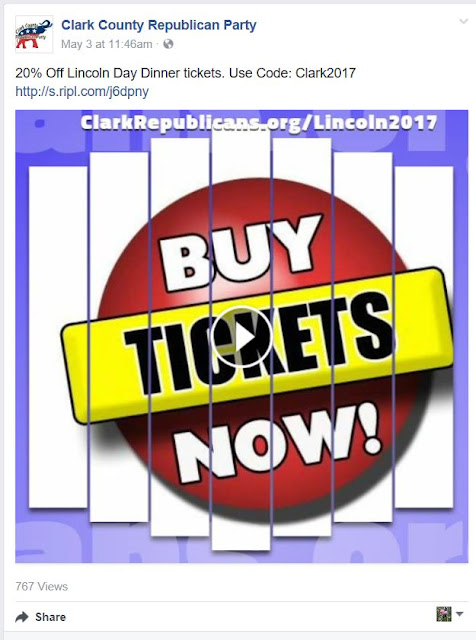 $120 per ticket was an inexcusable price to begin with.

Apparently, in many instances, FREE wasn't even a low enough price.
at 19:20

DRG is ill suited for the post and lacks the maturity that the role demands. He is ego driven and arrogant. He dismisses critical opinions and sees very little merit in investigating criticism. This is a sign of immaturity and an inherently intransigent attitude. Critics are the necessary checks and balances to hold individuals and power institutions to account. Without critics, we would have reckless decision making with no barriers to stop it. It seems DRG does not see the benefit of this and seems to take every constructive criticism as a personal slight. A little dramatic on his part, I might add.

The lessons from having an absolute debacle of a chairman in situ is that we need to engage more stringent vetting procedures and have someone who has established community ties and connections. A Myers Briggs psychological evaluation and a Strengths Quest test are invaluable in highlighting attitudes, tendencies and behaviours as well as profiling the type of individual and their suitability to the post. These measures should be integrated to basic background checks, education and work history with references, 3 unbiased character witnesses and a horizontal social media profile investigation.

Perhaps then, we may be better informed to endorse a candidate with some vital research and evaluations that can help the decision making process to instate or dismiss.

The disadvantage of this is that it is costly, but far cheaper than having to deal with the consequences of a petulant tantrum prone delinquent.