So.... how did Rivers spin getting smacked by the PDC? She lied, of course.

This is off her FB page:

The Public Disclosure Committee this week ruled on an election complaint and found my campaign committee had a technical error that triggered a fine. We’ll be paying that straight away.
I’m also glad to report that they determined this error was entirely unintentional on my part. Washington’s open, transparent campaign finance disclosure system is an important part of our elections process. Voters should be able to not just see campaign finance activity, but weigh in when they have cause for concern.
The public deserves the level of accountability that the Public Disclosure Committee provides. However, after we correctly filed amended transactions, we discovered that doing so makes it even more difficult for the public to follow along. So my goal in 2017 is to work with the PDC to find ways to ensure amended transactions are easily understood by voters so they can continue to be watchdogs over their elected officials. I am committed to integrity in our elections system, and this was a good learning experience for me so we can improve upon the system. #accountability#transparency
The error was far more than "technical," and they made no such determination as to whether or not the "error was intentional."

Rivers, of course, fails to mention that:

1.  The "error" lasted a year;
2.  She knew that her PDC account was showing just shy of $200,000 more than she actually had,
3.  She did absolutely nothing to resolve "the error" until *I* filed a complaint,
4.  And the PDC doesn't fine people $4000 without making a determination that, in fact, the person they're fining is at fault.

Here are the allegations against Rivers.  Judge for yourself if they're merely "technical" as Gas Tax would have you believe:  (Click on each image to blow it up in size) 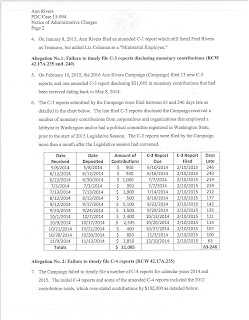 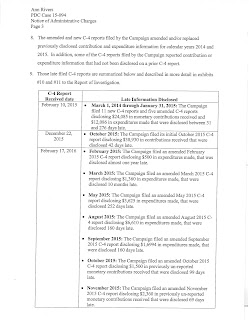 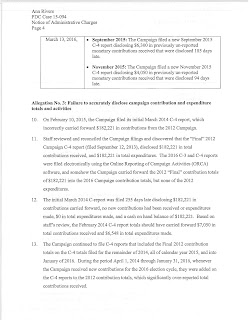 Yes, the public DOES "deserve accountability."

We deserve it for EVERYTHING an elected official does; such as for when a candidate or incumbent lies about their political positions and then bears major responsibility for hanging a $700 million tax increase around the necks of the people of this county.

The reality is this: the "amended transactions" were easy to follow.  In this case, they falsely jacked up the amount of money Rivers claimed to have in her account by an astronomical amount and Rivers, being Rivers, did absolutely nothing about it until I forced the issue.

Clearly, the system is easy enough for a neophyte such as myself to "follow along," let alone a professional consultant and 6 year elected incumbent like Rivers.

I'm reminded of the denazification questionnaire (Entnazifizierung Fragebogen) administered immediately after the close of World War Two in Germany.  It was required to be filled out by every German adult as an aid for Americans administering the American Zone of Germany to ferret out Nazis who had escaped arrest with the end of the war.

In answering the questionnaire, across the street (more or less) from the ancestral estates of the Count of Dachau (just outside of Munich) not one person admitted they knew anything at all about what was going on at the concentration camp.

The billowing clouds from the crematorium, the boxcars full of people, the smell.... none of them knew what it was, according to their questionnaires.

They ALL knew, of course.  The thing was built in 1933 or so.  They were just terrified to admit it.

If, then, like the people of the Dachau area, Rivers did NOT know?

It's because she didn't WANT to know.

You see, she claims that this scam was, in her words, "technical" and not deliberate.

As I pointed out: It may have been a "technical" error had she immediately set about to correct it: had she contacted the PDC of her own volition... had she worked with them to correct these problems.

Until I after I filed my complaint against her.

The reality is clear: had she been showing a campaign account $182,000 UNDER the amount she had accrued, you can bet she would have moved heaven and earth to get it fixed.

I get why she lied.  I get that she holds herself, wrongly, blameless.  I get why the sheep following her think it's just swell that she got away with it.  I, however, take a different view.

The rest of this is eyewash.  There is no excuse for a political veteran of far over a decade's duration not knowing or understanding what was going on and what the steps were for her to resolve these issues.

The deliberate nature, then, of her actions in this matter are clear: she had a duty to act in a timely manner and chose not to do so.

And there was nothing "technical" about that.
at 15:59