New Hampshire requires ID to vote... why don't we?

For years now, I've been advocating a voter ID law.

But the entire point of the Washington Secretary of State's office under GOP control appears to have been to reduce their workload.

The concept of a motor-voter ID law that RINO auditors and Secretary of State types love is to reduce their workload.

Particularly by failing to require proof of citizenship to register, or a valid ID TO actually vote.

Voter participation continues to plummet as more and more, we realize that our votes are meaningless.  Typically, we're lied to and abused by candidates to get elected, our voices are ignored at every level, we're scammed, swindled and gamed... all while a select few wander around scratching their heads, going, "gee, I wonder why voter turnout sucks?" 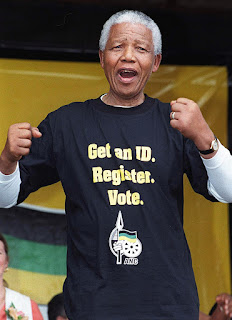 Well, was that supposed to be the justification for motor-voter?  Allegedly, to increase turn out/participation?

Well... how's that working out for us?

What does Nobel Prize-winning former President of South Africa, the late Nelson Mandela have to say about voter ID?  Looks like he pretty much supported the idea of election integrity through, well, a requirement for the voter to prove who they say they are.

Our vote seems fairly "repressed" without the help of any such laws.

But I believe what's driving the left is their innate sense that illegal votes will typically... USUALLY... break their way.  (But not always, of course.)  And that's the motive behind their complaining about efforts over election security.

Many on the left, knowing that their position is indefensible if common sense is applied, do what they always do when their rice bowl is at risk of getting dumped: whine, complain and name call.  But then, for certain element in politics, mud-slinging is the name of the game when their indiscretions are at risk of being exposed.

And we all know how much the establishment hates to be called names.

Meanwhile, this is the first election in New Hampshire that requires voter ID.

Strange, isn't it?  You have to have an ID to do damned near anything in this country, from driving to buying a house to, well, you name it.

That makes this issue entirely bizarre:  Requiring ID to write a check and in some cases (such as our local garbage transfer station) even have an ID to dump garbage (In conjunction with a credit or debit card)...

Of course, we are apparently one of 5 states where our ID is currently, essentially worthless to get on a military base and soon, to get on a commercial aircraft... which makes me wonder:

Will requiring secure ID at Washington State airports, when that requirement is finally implemented, result in "suppressing" the numbers of airline passengers engaging in air travel?

And requiring an ID to vote won't result in a reduced turnout for anyone but those who benefit from voter fraud.