In short, none at all.

Like so many other things in life, politics is an outcome-based business. That simpering idiot in the White House has screwed up the perception of this country in ways that, I believe, we'll never recover from.

Meanwhile, ISIS is a direct response to his incompetence.  Both nature and politics abhor a vacuum, and this guy has extended the one in his skull to the entire Middle East.

He stands there in front of the entire world and lies.  Such whoppers as "the war in Afghanistan is over," for example... while he restocks the terrorist ranks: 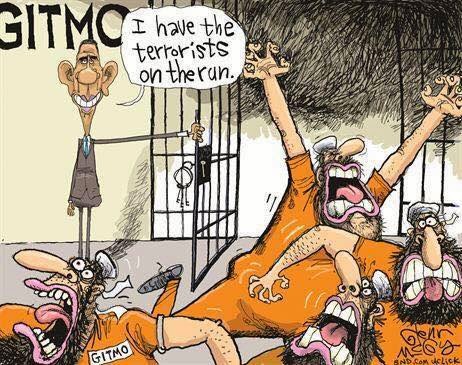 His debacle with the Muslim Brotherhood in Egypt.

His complete mishandling of the Iraqi SOFA.

The bizarre idea of reducing the ranks of the military... while engaging in rampant social engineering that will spill blood, reduce effectiveness and cause us to suffer.  (There's a reason the latest poll gives Obama only 15% support in the military.)

His efforts to keep us dependent on ME oil by reducing and slowing drill permits and jamming the Keystone Pipeline.

His failure to even have that lowlife Attorney General drive across town to participate in the Leader's demonstration... that he, himself, should have attended... had he been able to tear himself away from his golf game.

His complete lack of stature and cowardice in the face of Russian/Iranian/Terrorist provocation... And let's remember, the bumbler-in-chief's characterization of ISIS as"the JV team..." a team we've done essentially nothing about as they grow stronger, slaughter more and decapitate the odd American.

Since the moron running the show is in so far over his head they have to pipe daylight to him, it's no wonder that someone... anyone... makes the effort to step up and fill the vacuum of leadership that Obama represents.

Obama's inexcusable and insulting behavior to Prime Minister Netanyahu, head of the government of our closest ally in the entire region, begs for an intervention.  While I am by no means a Boehner fan, I do support this action on his part, and if Obama gets all butthurt about it, that's just too damned bad.

That Obama fails to understand or care that the people of this nation support Israel, well, that's just par for the leftist course, mirrored here locally by our leftist cult on the CRC Scam that has cost them almost everything.

I look forward to watching the prime minister use Obama as his pinata given how many times Obama has done the same.
at 12:49