Another reason to vote for Atkins: memo to Shane Gardner - the RIOTERS are responsible for this.

I get it.  Shane Gardner doesn't want to be County Sheriff.  He wants to be the County Social Worker.

I've nailed Gardner over his narcissism and his abuse of his badge.

Not letting a "good crisis go to waste," in the words of Obamaite Rahm Emanuel, Gardner felt compelled to babble about something he knows nothing about: namely the idiocy of rioters destroying their own community in Ferguson. 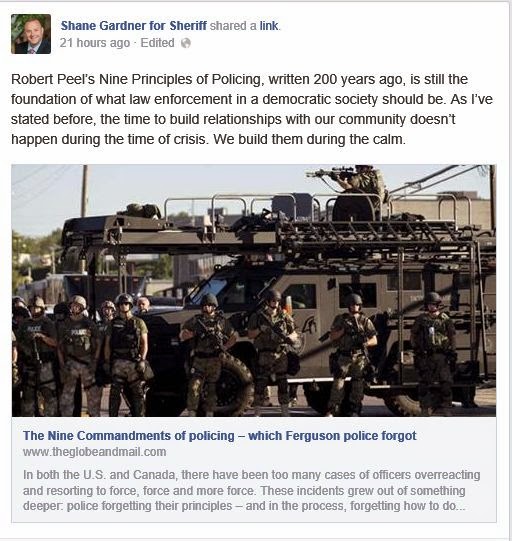 See, here's the thing: I want a Sheriff who would, under the circumstances, be concerned with one thing and one thing only: restoring order.

Dozens, if not hundreds, of people are killed in Chicago over several weekends on a regular basis.

Gardner, who's never ran anything bigger in a police department then, relatively speaking, a popsicle stand, thinks he's got the answers.

And to prove it, he links to an article written by a Canadian editorialist, who knows as much about police work as Gardner does about performing brain surgery... That writes about an article authored by a Brit 200 years ago at a time when that author could not possibly have conceived of the convoluted thought process that would lead a candidate for county sheriff to blame the police for a Ferguson situation...

The inference is clear... and despicable: If Gardner were the head guy in Ferguson, none of this would have happened.

Well, here's the thing: Gardner doesn't know any more about minorities than he does humility.  And he's possessed of neither.

Those responsible for the rape of those businesses that have been destroyed...stripped and denuded... are not the police of Ferguson.

There is, in fact, precisely ZERO excuses for the reaction of the rioters.

From a strategic perspective, those at fault for allowing this to spin out of control are those who were best situated to put a stop to it.

The Governor should have sent the Guard in THAT NIGHT.  He SHOULD have implemented a curfew THAT NIGHT.  And it STILL should be in place.

And to restore order from these criminals, I really don't give a damn if the police use an Armored Cavalry Regiment.  (I can suggest a few, if asked.)

In times like these, the ONLY job of police forces is to protect the innocent.  These scum doing all of this damage and stealing everything not bolted down didn't need the death of this thug as a reason to destroy what many have worked their entire lives to build up.

And Gardner, who I'm beginning to question as to whether or not should even be allowed to wear a BADGE, let alone be the County Sheriff... expresses no concern whatsoever for the victims of these scum who rob and pillage... while inferring that it's the fault of the police since those rioting are, obviously, incapable of controlling themselves when it comes to the ability to rip off the latest Nikes or steal a big screen.

All in Brown's memory, to be sure.

Despicable.  And yet another reason the "Shane Train" is derailed.