No one, and that includes any democrat, has done more damage to the local GOP than it's drug-addled narcissist of a chair.
﻿
The organization has become, for all intents (including political) and purposes, worthless. And when seeking a cause for that horrific outcome, there is but a single concentric circle that ends in the chests of Davey Delete and those who enable that worthless toad to continue to drive the train off the tracks.

He also doesn't know that he's not supposed to do cocaine or meth, among other things, as leader of the GOP.

Ever since this liar showed up on the scene, he's been a disaster.

A thief, a criminal background, multiple DUI's, a narcissist, an admitted drug user during his tenure as GOP chair.

His failure as chair cost the county GOP tens of thousands because he blew off the hearing.  His lies about how this was going to be fixed in the Legislature (I wonder what idiot told him that?) his LDD failures, his inability to fund campaigns, his deliberate actions that have cost the local GOP thousands of dollars that instead have gone to the victim of his frivolous law suit that HE isn't paying for...

His failure to spend any time attacking democrats (And let's face it, isn't that what he's SUPPOSED to do) while he spends unlimited time attacking the Party base as illustrated below, combines with his failure to run anyone in the 49th District or for treasurer... his list of failures is both long... and distinguished.

So, here's the deal: Former GOP Chair Kenny Smith reminded us all of the reasons why Party donations have reached a new low.

And the reason is Gellatly. 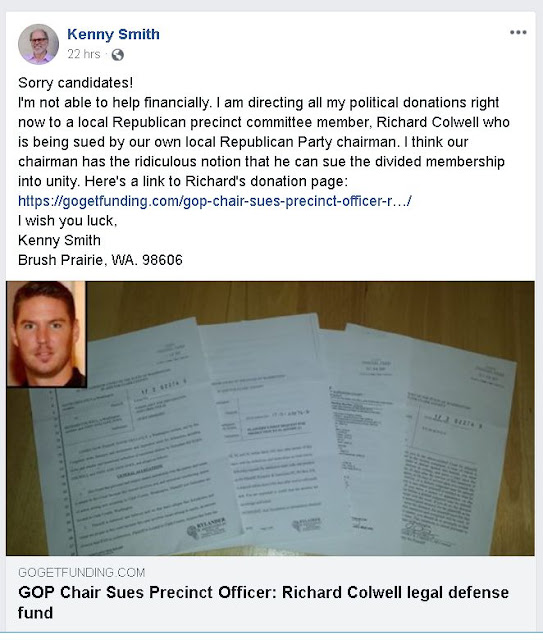 Now, our druggy chair didn't take too kindly to the truth, so he did what he always does: he immediately attacked our former GOP chair, Kenny Smith.  And then, being the drugged out idiot he is, he felt the need to attack ANOTHER former GOP chair, Anna Miller.

Gellatly is known for many things.  Among them, besides a genetic inability to tell the truth or take responsibility for his multiple failures, is posting attacks against those smart enough to oppose him... and then deleting those posts because that moron apparently is incapable of grasping the concept of screen captures.  The evidence of his lies and slander would fill a warehouse.

So, in addition to his many other talents is his rank, stinking hypocrisy.  NO ONE has engaged in anything approaching the amount of slander this scumbag spews.  Here's a sample: 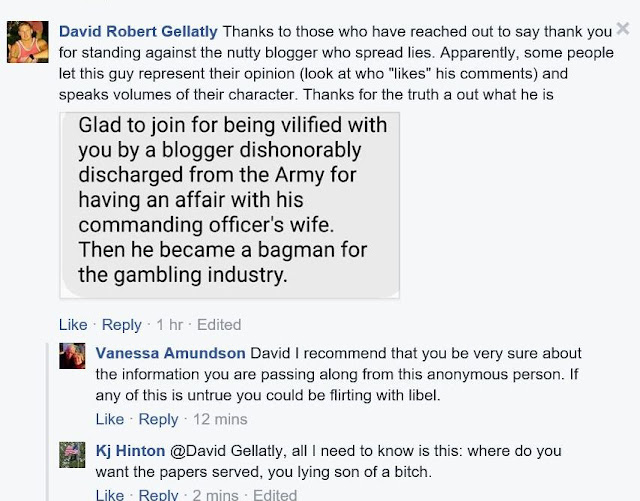 Now, I suspect this information came from an elected official with their own adultery problems, but that's neither here nor there.

None of it's true, of course, but I point out this example of Gellatly's rank hypocrisy.  He whines and bitches like a cut cat over what HE calls "slander" aimed at himself... but has no problem whatsoever engaging in the practice himself when the mood strikes.

So, when that slimy son of a bitch whines about "slander," feel free to remember what he said about me.

And then remember this: 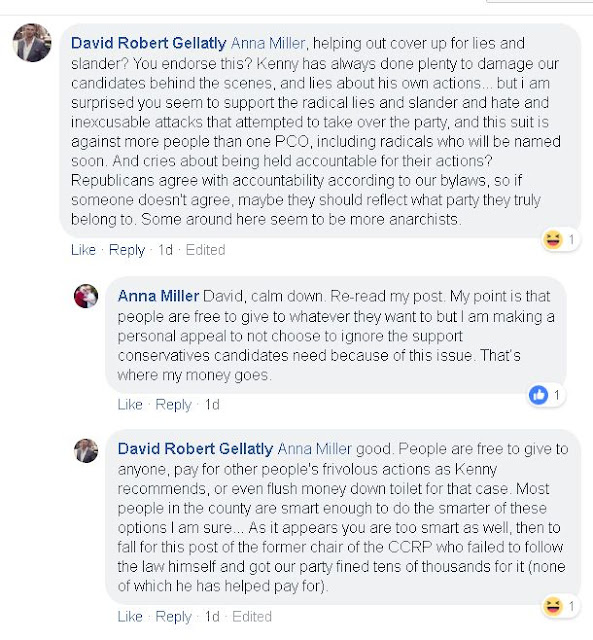 The irony of THIS liar complaining about others, in his opinion, lying as well?

The party was fined thousands of dollars in large part because this scumbag blew off the hearing.  No one from the Party bothered to show up and a default judgement was entered.  Even Brent Boger, RINO extraordinaire felt compelled to bitchslap Druggy over that one.

ALL OF THAT RESTS DIRECTLY ON TESHOULDERS OF DRUGGY ROBERT GELLATLY.

He knows it, I know it, everyone involved knows it.

It would, of course, be one thing if this little worm had showed up to fight it out, but he couldn't be bothered.

The Clark County GOP is tens of thousands in debt.

And every penny of that is on Gellatly.
But do you expect him to take any responsibility for any of it?

No one in their right mind would hire this scumbag to be a janitor.  He's fail the drug test that most companies require and he has a proven record of lies, arrogance, incompetence and ignorance.  How he got the job of GOP chair is simply inexplicable. 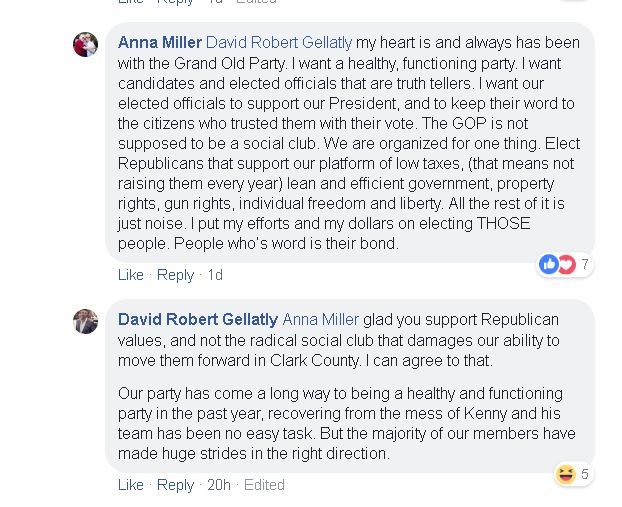 ﻿﻿He projects a bubble of delusion because here's the reality:

If, as this lowlife liar claims, the Party had "come a long way to being healthy and functioning in the past year," then why does he feel so compelled to attack those who know better?

If this isn't another example of his drug use, I don't know what is.
﻿﻿The Party is shattered, divided like the Grand Canyon.  Heading towards being broke, unable to materially provide candidates with enough money to make any difference, unable to provide volunteers in any meaningful number and, effectively, dead in the water; unable or unwilling to do that which they exist to do: attack the democrats and provide the voters with a reason to vote GOP... not RINO, but GOP... and this moron, this fake, spends all of his waking time doing what he stupidly did here: attacking conservatives who are sick of his childish, incompetent, drugged out arrogance and self-superiority that simply does not exist in any way except in his drug-damaged brai

Druggy even stupidly admits that the bogus suit he filed is to shut up his opponents:

this suit is against more people than one PCO, including radicals who will be named soon.

Obviously, the fake defamation aspect (how can you defame a proven scumbag?) is merely cover for his efforts to silence those who want him politically dead.

But then, we knew that going in, didn't we?
﻿
I freely admit I have donated to the victim of Druggy's arrogance and psychotic demand for power.

But I also know that the time for Druggie to honor himself will soon be at an end.

Outside of Druggy's fundraising to pay for this affront of a lawsuit to silence opposition to his idiocy, his aim is cleared up this babble.

The Party is a train wreck.  Delete apparently does not understand that as the chair, EVERYTHING THAT HAPPENS IS HIS RESPONSIBILITY. Druggy refuses to admit it for the same reason he refuses to take responsibility for his manifold failures:

His ego couldn't handle it.

Druggy makes bogus claims about everything from how much money Lincoln Day Dinners on his watch make to how "united" and "healed" the party is on his watch.  But he NEVER takes responsibility for any of his massive number of screwups.

Other dictator types have, throughout history, followed the same tenets of "leadership."  And typically, it doesn't end well for the dictator.

He's a disaster.  A clueless child, in so far over his head that his enablers are forced to pump in daylight.  And this scumbag can't be gone soon enough.
at 18:25