A disease infesting most all candidates.

Since Sen. Ann "Gas Tax" Rivers has been beaten to a pulp for lying to get elected over her bogus opposition to gas tax and tab fee increases, there's been a noticeable disease amongst most politicians running for office around here.

In 2012, folks knew what they were getting with most local politicians.  Most would write up specific issues, what they believed those issues meant and how they would address those items were they to be elected.

Do you see that now?

Here, for example, is Larry Hoff's entire policy on transportation: 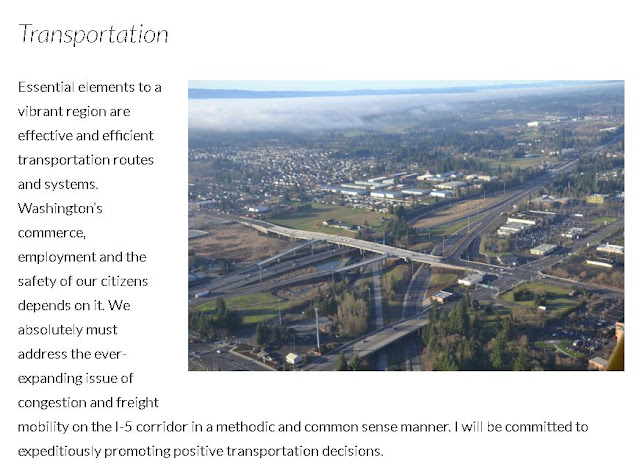 A few words that mean nothing.

"Glittering generalities" that are utterly meaningless.

What's he going to do about the CRC scam his fellow RINOs have signed onto?

Where is he at on tolls?

What's his position on additional bridges and where would he put them?

Would he have supported additional gas tax and tab fee increases like his puppet master, Rivers?

Rivers was very specific about that: 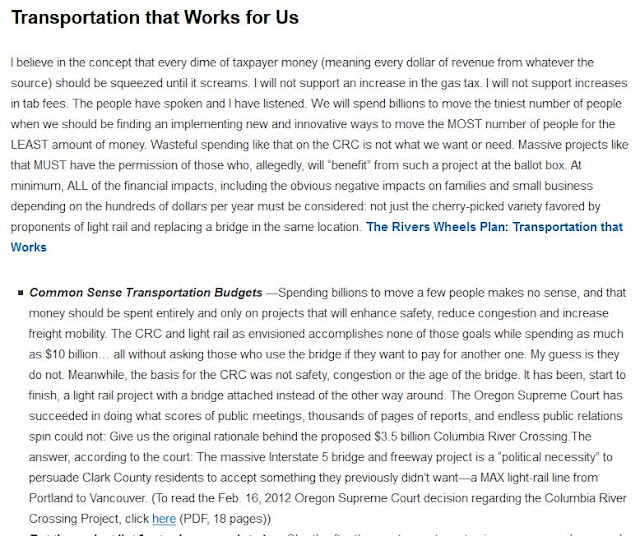 This is the way it used to be.

But Rivers, for her part, posted this (And I ought to know, since *I* wrote it) lying all the while... unbeknownst to me.

And this was the part that led to her stabbing me and all the rest of us in the back:

And I have beaten her to a pulp for lying.

Instead of in depth, detailed agendas that explain the major elements of a candidate's positions?

We get fluff like Hoff... who posted similar garbage on a few of the issues important to us... simply ignored the rest.

He provides zero reason to vote for him except for the "R" after his name.  And as his puppet master Rivers has shown, that is no reason at all.

But the cowardice these candidates show... their determination to avoid any accountability... isn't limited to just the RINOs.

Like the cowardly Hoff and many others on the right around here, few tell us anything at all.

These people abhor transparency.  The less the electorate knows, the better.

And the people in power claim to be upset at the low voter turn out... all while doing everything they can to make sure it continues since they really do believe the average voter to be stupid.
at 11:36