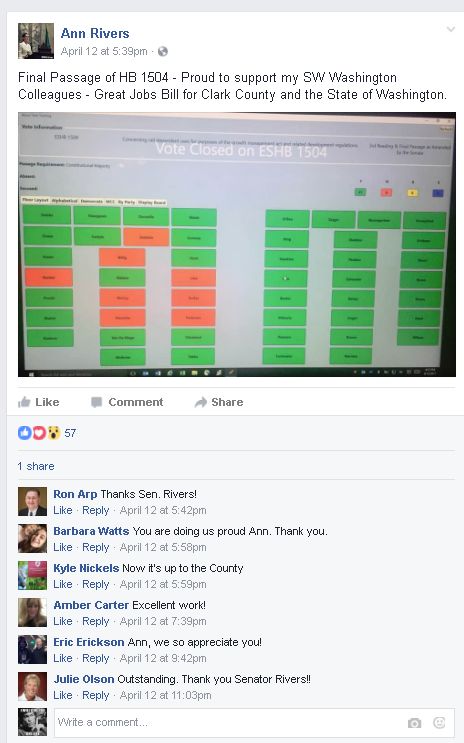 Now, to me... and those kissing Rivers'... ring... on this, it appears that Rivers seems to be taking credit for the passage of this bill.

It could seem that way because those commenting in kissing Rivers' ass for voting for a bill that would have just as easily passed if she had voted "no" or not bothered to vote at all, that somehow, her participation in this process was a needed component.

Or, it could seem that way because Rivers has become such a petulant punk that she even refuses to mention who actually sponsored this bill...

Now, Rivers hates Pike for a variety of reasons, not the least of which is Pike publicly fought her efforts to screw us on the largest gas tax and tab fee increase in the history of this state.

Further, Rivers also just sold us out on her recent effort to rip us off by resurrecting the CRC/Loot Rail scam.... which Rep. Pike also opposes.

You would think that this bill, important enough to have people like Ron Arp, failed shill for the Yakima Millionaires effort to screw everyone in this county with a surcharge on even movie tickets to pay for Steve Stuart and Mike Bomar's idiotic effort to jam a ballpark down our throats by making all of us pay for it without asking... and RINO Julie Olson weigh in on it (And you know damned well Olson wants Rivers on board for her reelect... and you also know that Rivers WILL endorse that fringe-left RINO)  that Rivers might mention... even in passing, that ALL of the credit for this bill goes to Pike... and NONE of it goes to Rivers.

Clearly, Rivers' complete lack of integrity and honesty keeps her from giving credit where it's due.

Rivers, in fact, has become the very thing she used to tell me that she hated.. the very thing I was being paid to stop her from becoming... a corrupt, political hack.