One of the many reasons I retired from doing campaigns is that I was sickened by the hypocrisy that was everywhere to a greater or lesser degree.


And the winner of the hypocrite of THIS election cycle award goes to…. Brent Boger.

I've been trying to talk less about politics but things happen I feel compelled to comment on. The latest is a hit piece done on Republican Senator Ann Rivers by her opponent Eric Holt. Eric seems to be a nice guy, but he's running a tough race in a Republican-leaning district against one of the most respected Senators in Olympia who can get a lot of support from Democrats.

He attacks Ann for changing her mind on the transportation package. Look at these two pictures. He's changed his mind about something else. The picture on the left is the one he used in his hit piece. The one on the right is what was posted earlier on his Facebook page. He cropped a lot of himself (and his wife and one of his kids out). Why? Is it because he has more tats than the average Pelican Bay inmate? His FB tattoos are a bit over-the-top for the conservative 18th legislative district.

His views are too left and also out-of-line with the district. Yet he seems to have formed an alliance with K.J. Hinton, a local self-styled conservative blogger who has views more consistent with nihilism than conservatism. The mailer is written in Hinton's style and regurgitates his ad nausea complaints against Rivers posted on his blog.

Not convinced? When Holt was asked who his conservative supporters were, he could only identify Hinton. The people in the room could hardly contain their laughter. (See my first comment below).

Hinton and Holt, because he's embraced Hinton, have no credibility. An angry man of the Left and an angry man of...what I don't know...are working together. Hardly surprising.

Boger, who certainly didn't view me or my blog this way back in the day when HE wanted me to use it to HIS end... or when I defended him repeatedly during, say, his prosecutor’s run or when his now drinking buddy Lou Brancaccio was going to fillet him in his column,... found it convenient to compare his VERY best buddy, Sen. Ann “Gas Tax” Rivers’ betrayal of her district and this county, to the tune of $700 million on her gas tax opposition lie, with what he perceives is an attempt by Eric Holt, Rivers' opponent, to cover up tattoos.

That Holt or anyone else would point out that Rivers is a flat out liar has nothing to do with me or my blog.  The lies are stand-alone.  I merely continually point out the lies so that when scum

Boger is pissed at me because I've done all I can to get rid of that liar he’s attached to closer than most leaches... and the OTHER liar he helped get elected, County Clerk Scott Weber, who ran on a platform of eliminating his job as an elective position KNOWING he would never do anything to make that happen.


The mailer is written in Hinton's style and regurgitates his ad nauseam complaints against Rivers posted on his blog.

So, Holt is guilty of mailing out the truth about Rivers to this district?  Because I've written about Rivers' lies and dishonesty, Holt shouldn't say anything about those issues?

And isn't it interesting that Boger makes no claim that what I write is false? Or made up? Or even slanted in any way... and that, in fact, he's just whining that I say anything about it at all?

But the dozens of emails I have from Boger related to his campaign for prosecutor among other things and my blog tend to speak for themselves.  Same for Rivers, as far as that goes, where the number is in the hundreds.

Meanwhile, the issue confronting the voters of this district is simple:

Do you reelect a proven liar who has shown she will betray her word and the people of her district if the “price is right?”.

Or do you vote for someone who you may not agree with politically but who appears to be, in every respect, an honest man?

As far to the left a RINO as Boger has proven himself to be, I would have thought that he’d be past his bigotry towards tattoos.  This, oh so much more intelligent and enlightened creature would be the first to tell you that he has no bigotry based on appearance... and, of course, looking at him, that’s by far the best position to take.

But the most bizarre aspect of this is Boger, who seems to think he’s somebody for some reason, claims *I* have no credibility and because I oppose the liar who, if she were to stop suddenly, would cause Boger’s entire head to disappear… and therefore Holt has no credibility either.

Boger, looking and acting like a troll, cannot revise history.  He can call me every name in the book if it makes him feel better.  But that won’t change either his history with me or Rivers’ either, as far as that goes.  And when those two needed me and my blog, they had zero problem asking to use both.

For the record, I have not seen the mailer, had nothing to do with the mailer, and have no idea what it says.  However, for Boger types, mere truth will never stand in the way of his meme.

Note Boger’s careful turn of the phrase: ”He (Holt) attacks Ann for changing her mind on the transportation package.”

That’s not what happened, Brent: no need to lie.


She made a pledge to the voters of the 18th District to OPPOSE gas tax and tab fee increases to get elected. (Isn't it odd that Boger avoids calling it what it is?  Why do you suppose he’s such a coward about the whole thing?) 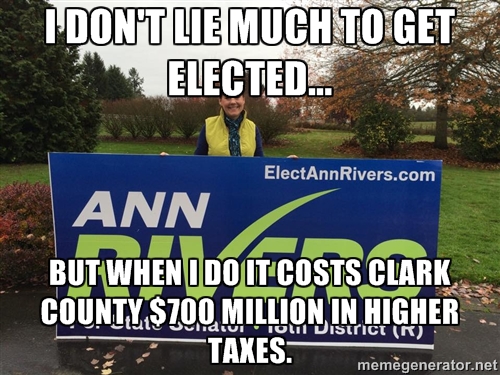 Over 70% of her district opposed the gas tax and tab fee increases that SHE ALSO OPPOSED to get elected and then betrayed us all to implement… the largest gas tax increase in the history of this state.

As a lawyer, I’m pretty sure that even Boger would call violating a pledge a “lie.”  But now... when it comes to Rivers... oh, no.  He's invited to dinner out there... so he can't use the same standards against Rivers that he uses against anyone that's a conservative.

You see, because he and Rivers are so “close” now (She tends to think of him as a family pet, kinda… the Boger-centric conversations Ann and I used to have!) he doesn't care if she lies… about her gas tax scam and her PDC’s where she overstated how much money she’d collected for over a YEAR by $175,000… although the Attorney General might care since that office is reviewing those complaints right now… and so we have this bigotry on full display for anyone and everyone to see.

And that makes this the most bizarre issue of all.

Who knew that a leftist, white-bread liberal like Boger would turn bigot for his BFF, Rivers?  And use me as a cudgel of sorts considering back in the day when I worked on his campaigns and he used this blog, or tried to, for his own ends... just like Rivers....

Those commenting under Boger's exercise in wearing out kneepads in front of Rivers on his facebook page are certainly not those I typically agree with.  But I agree with them on THIS, and that Boger can't seem to prioritize between a candidate's appearance and a candidate's complete, proven lack of integrity is inexcusable... but certainly not inexplicable... since I've explained it.

Hypocrite, much, Brent?  Cause, I gotta wonder: would you be spewing this crap if I was all in for your buddy?

Of course not.  Kind of makes you a clown, don't it?