In my view: democratian fails the journalism test: Greg, step away from the bong before you post on pot.

We were all hosed by the lies used to pass I-502, the pot legalization initiative a few years back.

Actually, I do agree with the title of the nonsense written today:

Because they certainly have, just not quite the way Jayne portrays it.

The campaign was a campaign of lies and fantasy from the very beginning.  Regular readers are well aware of the false numbers and promises made, since I've repeatedly brought them up. The rag got hosed on the scam, because they're incapable of critical thinking:

The number of $582 million in promised yearly tax revenue was a fantasy...

To actually hit such a number would require Washington State's 7.2 million people to buy enough pot to generate $81 for every man and woman and child living in this state... or $291 or so worth of pot.  Each.  Every man... woman... child and infant.

The rag continues to trumpet bogus and unrealistic numbers, saying today, for example, that "Predictably, the journey to legalized marijuana in Washington has been accompanied by a few bumps in the road. Introducing an industry that produces more than $300 million in annual revenue is bound to create some unforeseen problems."

First of all, the rag has never admitted they got hosed with the $582 million number... or that, in endorsing this idiocy, they hosed us.  But in all the times the Daily Izvestia has screwed us, they've never admitted they've been wrong, so this isn't surprising.

But a number THAT big?

So, I went and committed the cardinal sin of actually looking up the latest revenue numbers, and stunningly enough, this is what I got:The number, ladies and gentlemen, through last July, was not, of course, $582 million. In fact, the number was just over 10% of the promised amount: $62 million to the state... and additionally, $8 million locally.

Washington's racked up more than $250 million in marijuana sales in the past year — roughly $62 million of which constitute marijuana excise taxes. That's beyond the state's original forecast of $36 million. And when state and local sales and other taxes are included, the total payday for the state and local governments tops $70 million.

So... what happened to that $582 million figure? And when the rag writes this garbage:

So, yes, there are some kinks still to be worked out as the state deals with legalized marijuana. But there also have been some clear benefits. Projections are that tax revenue from marijuana sales will top $1 billion by the end of 2018; the revenue demonstrates how legalization has diminished the marijuana black market; the legal system does not have to spend time and money catching and prosecuting citizens for marijuana possession; and, as the Times wrote editorially, “recreational users’ wink-and-a-nod exploitation of the medical-marijuana system is gone.”

I have to ask: was Greg high when he wrote this babble?

We will be hundreds and hundreds of millions of dollars short of a "billion" dollars in tax revenue by the end of 2018.

To achieve such a number would require each of us down to our newborns to have purchased almost $4.4 billion worth of pot, including the 37% tax.

Because of the tax and overhead, blackmarket sales CONTINUE apace: the reality is that if someone can but a product for 40% less (Conservatively, considering the tax and the overhead of a retail establishment) they will do so and there will be sellers to provide it, sales where there are no tax incomes figures available... since there isn't any.

And the idea that somehow, "the legal system does not have to spend time and money catching and prosecuting citizens for marijuana possession;" is more democratian revisionism:  Or have they forgotten this recent beauty: 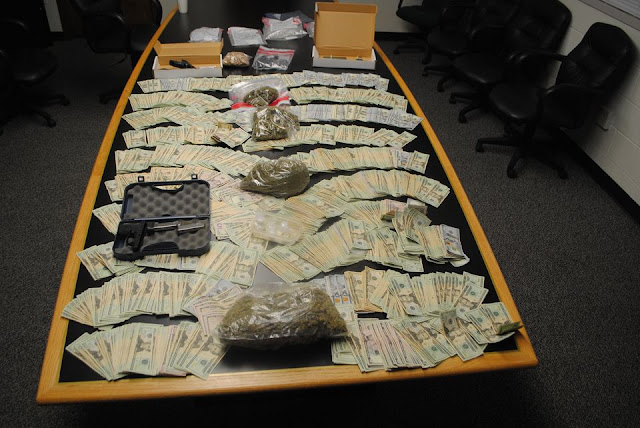 A disturbance at a neighborhood Easter egg hunt led police to a nearby home, where they recovered drugs and $108,000 in cash.

By The Associated Press
The Seattle Times

A disturbance during an Easter egg hunt Saturday evening in Salmon Creek, north of Vancouver, led to the discovery of a large-scale unlicensed pot operation, according to the Clark County Sheriff’s Office.

At about 6 p.m., police were dispatched to a report that the neighborhood Easter egg hunt had been interrupted by a man screaming that his roommates were going to shoot him, according to a story published in the Vancouver Columbian.

Police arrived in the area and learned that the disturbance was related to a marijuana distribution operation headquartered in a nearby home, police said.

Three men, two aged 24 and one 27, were arrested on drug charges. Two of the men had warrants for their arrests from Missouri, police said.

“It is believed that deliveries were occurring across the United States” from that pot operation, the news release said.

Detectives with the Clark Vancouver Regional Drug Task Force obtained a search warrant for the home and four vehicles, and they found 45 pounds of processed marijuana and $108,000 in cash, police said.

The pot was seized, along with five vehicles.

THAT is a "diminished market?"

Clearly the democratian gang is as clueless about the pot scene as they are the CRC/Loot Rail scam.

Locally, of course, tax revenue will be hammered by Oregon pot retailers who sell their product currently with a 25% tax that is scheduled to be reduced to 17 to 20%.

I get that the rag stuck their crank out to get this idiocy passed.  I also get that they would rather cut off said crank with dignity than admit they screwed up.

But this editorial column today was pure fantasy, much like their column endorsing I-502 and the I-502 campaign itself.
at 10:31