Thoughts on "the Establishment."

Little Jebbie's response to the "Establishment" dig at the last debate seems to have impressed a wide number of people.

But your last name has nothing to do with Establishment credentials.

That your dad and brother were president?

That your mom is Barbara Bush?

What automatically makes you "Establishment" is much the same thing that makes you a RINO: you think your view is superior to all others who disagree and you have no problem doing what the left wants because you're incapable of thinking for yourself and you hate all things conservative.

I despise RINOs and I despise the Establishment, although typically, they're one in the same.  They all believe they're the smartest guy in the room and to them, NOTHING is more important than getting someone elected who has, or had, an "R" after their names.

Such is why the moron RINO/local Establishment types coalesced around my psychotic brother-in-law instead of actually, well, supporting a Republican for county chair... while 61% of the voters of this county wanted someone else.  Those pulling Jeanne Stewart's strings (Tracy Wilson) did a masterful job. 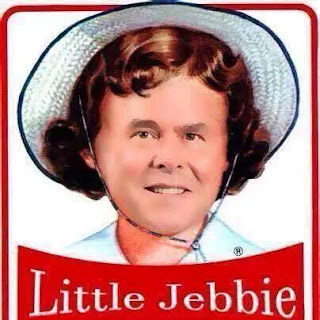 As if it would matter, given that there was no difference of any kind between Boldt and Dalesandro and the agenda since the fringe-left nutjob scammed his way back into the job would have been exactly the same as how the Three Stooges have damaged us now, even if Dalesandro had won.

No... you see, Little Jebbie could have the blood lines he has and actually been anything BUT "Establishment."

But he was The Chosen.  He was The Guy.  And he lost me, as Rubio and Christie and others have lost me, by caving on illegal aliens... which is a sign of the weak character that RINOs/Establishment types possess.

I would rather vote and lose while doing the right thing, then act as if principles were of no importance and that keeping your word when you run is not SUPPOSED to be the cornerstone of honorable politics... situational ethics be damned.

You know, like claiming you'll get rid of Obamacare.

Or claiming that you'll oppose a gas tax and/or tab fee increase to get elected.

RINOs/Establisment types are just the opposite.

They'd sell their own children to get elected and then not give a DAMN what they promised to get the job OR what the people you allegedly represent want for you to keep the job.

No, Jebbie isn't "Establishment" because of who birthed him or who those who've gone on before happen to be.

He's Establishment because like most leftists, he views laws as suggestions and is deaf to the cries of the people of this country who want our borders secure, our illegal aliens removed, our budget fixed and our deficits ended.

The base is seething.  And we get clowns like Carolyn Crain and fakirs like Marc Boldt and liars like Ann Rivers, not ashamed to have lied to us, but instead, ashamed to have made the promises in the first place, according to her.

If you're a RINO, I will not only not vote for you, I will vote against you.  Because time after time, Republican control of anything from the county council to the state senate to the US Senate has proven to be a joke.

I would rather have a true leftist who makes no apologies for what they are and tells the truth, than the most lying RINO who happens to see advantage in putting an "R" after their name to manipulate the people into voting for them... (Greg Kimsey) particularly when they act like their promises and positions are as worthless as they are... and what The People want is equally worthless.

Because, these RINO/Establishment types tell me, "that's how business is done."

Kelly, thanks for calling these RINO's out and hitting them with the facts!!!